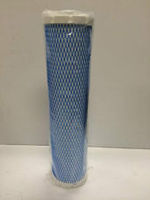 When we told him our price for the filter, there was silence on the other end of the phone line, and then a, "What?". This was a national distributor for industrial supplies (similar to Motion Industries) and we had to explain that their company often buys filer elements from us.

This difference in price is 133.333%, which is similar to all of our filter element replacements. They are typically 2 - 5% less than the prices from compressor and filter OEM's such as Finite and Pall.

We just have a much different and more fair price.